Ever since Neil Sedaka was in Brazil for the very first time, in November 1959, even before he had his first top-10 hit in the USA ('Oh! Carol' would hit #9 at Billboard's weekly survey on 7 December 1959) he and Celia Vilela developed a strong friendship that some would say amounted to a full-on romance.

The fact is Miss Vilela visited the USA soon after (January 1960) and was a guest at Neil Sedaka's home in Brooklyn, N.Y. where she had the chance to meet the whole Sedaka family: Mum & Dad plus sister Ron who would show a bit of New York City to the Brazilian starlet.

Sedaka was back in Brazil in March 1961. He visited a few radio stations in Rio de Janeiro and had a lot of photo opportunities with Celia Vilela who had a radio show at Radio Globo by then.

Six months later, January 1963, Sedaka is back in Rio de Janeiro where he would take part in 'Instant love' (Pão de Açucar), an American movie where he placed 3 of his songs: 'Instant love', 'It happened again' co-written by Buddy Kaye and 'Fetch me a fortune'. This time he brought his mother along to show her the Brazilian Carnaval. 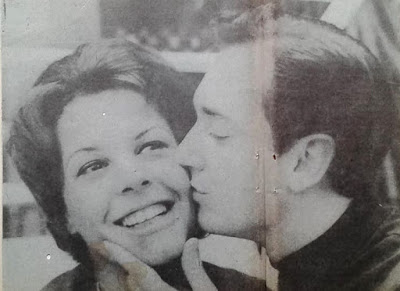 Neil Sedaka shows how much he likes Celia Vilela at the Copacabana Palace in Rio.


Multi-media performer Celia Vilela, who's been a singer, dancer, show-girl, radio announcer, TV Master of Ceremonies and a journalist working for weekly magazine 'Revista do Radio' meets Neil Sedaka at the Copacabana Palace's swimming pool grounds on his 3rd trip to Brazil.

Sedaka tells the journalist he was the first American artist to sing Brazilian Bossa Nova in the USA. Telling about his beginnings he says the first time he went on the stage was as a pianist and he confesses he was really nervous.

Why did you become a singer? I followed the advice of people like Ray Charles, Connie Francis and Bobby Darin to whom I had to show some of my songs when I was barely 16 years old. 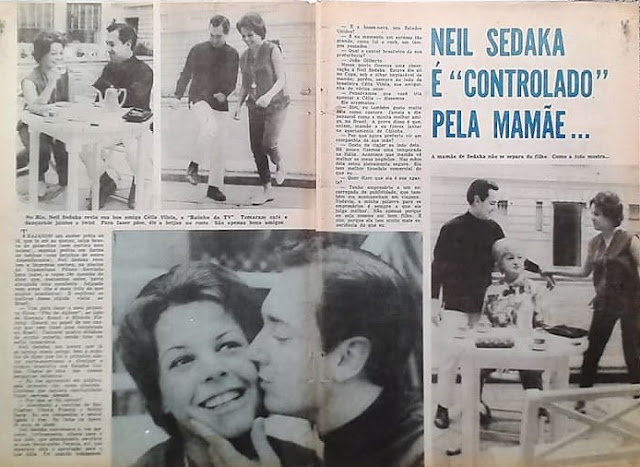 
As Neil talked to the journalist he kept on looking at his mother as if he expected her  approval.

We asked him what is Brazil's best singer and he said he considered João Gilberto the top. As the reporter saw Celia Vilela following the chat he said he'd thought Sedaka would have chosen Vilela.

Sedaka wasn't abashed. He said: 'I like Celia Vilela as a singer too. Besides she's my best friend in this country. Just to prove it, Mother and I went to have dinner at Celia's apartment only last night'.

Why did you bring your Mother along this time? 'Because I like to travel with Mom! We have just traveled through Italy recently. Mother is a sharp businesswoman. I feel really secure in her hands'.

Then, your Mother is your agent? - 'I have both an agent and a publicity man who follow me around  but Mother's last word is what it counts to me'. 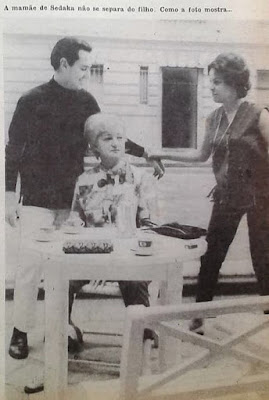 Posted by Carlus Maximus at 05:30 No comments: