Around October 1966, an obscure instrumental rock band from Rio de Janeiro started charting their album 'Na base do iê iê iê' aka 'Na base do ié ié ié' they recorded for independent label Equipe which had started only in 1964. On 21 October 1966 The Pop's album was #1 at the weekly album-charts printed by Rio de Janeiro's daily 'Tribuna da Imprensa'. 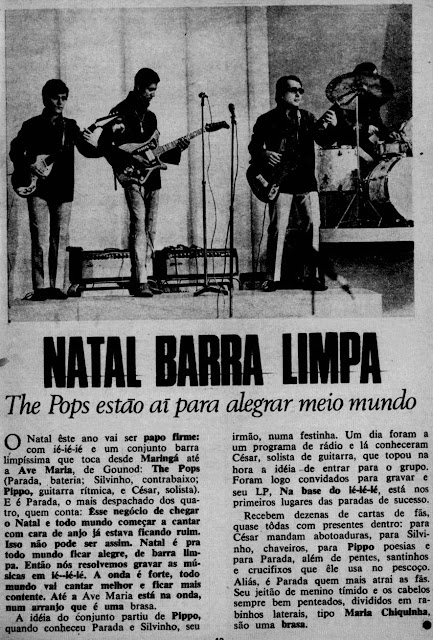 At first there were 3 guys who went to Jacarepagua's National Tecnichal School (Escola Tecnica Nacional): brothers Silvio Jose Stop (took building-projects), Jose Henrique Stop aka Parada (took electronics) and Alipio aka Pipo who took mechanics. Pipo's brother was in the Navy and brought amplifiers & musical instruments back home from abroad so they decided to form a rock band. Silvinho played bass, his brother Parada the drums, Pipo rhythm guitar and a neighbour Mirinho played lead-guitar.

The Pop's played at circuses and dance-clubs in suburbs like Sao Joao do Meriti, Caxias and Nova Iguaçu. Soon they were invited to play at DJ Helio Ricardi programme on Radio Maua on Saturdays from 12:00 to 2:00 PM. Radio Maua had live-music-shows then most of time on Saturday so one day in 1965, when Mirinho didn't show up for the engagement the 3 guys asked Joao Augusto Cesar aka J.Cesar who played in the band of an earlier gong-show to stand in.

J.Cesar had been playing bass & lead-guitar since 1957 with singer Cauby Peixoto at radio stations around Rio de Janeiro. Now J.Cesar played 5 days a week at Radio Maua for Rogeria Gimaraes show and on Saturday he played in the band that accompanied amateur singers in a gong-show emceed by Celia Mara from 10:00 AM to 12:00 noon.

Conservative DJ Flavio Cavalcanti had a TV show in which he blasted rock'n'roll as a brainless kind of music made by brainless musicians who didn't know their right foot from their left. He asserted that good music was the one made in the 1930s and 1940s. To prove Mr. Cavalcanti wrong The Pop's rehearsed a medley of 7 old-time hits they called 'As 7 maravilhas' (7 Wonders) ranging from 1910 to 1957 and played it at his Sunday TV show. The medley started slowly and gradually picked up steam with a rock beat that made The Pop's a sensation overnight. By Monday, The Pop's were the darlings of the record companies but somehow they chose to record for independent label Equipe.

Soon the 4 lads went into the CBS studios at Praça da Republica and recorded 'Na base do iê iê iê' an album with the popular medley first presented at the TV show plus a few songs that were on the Hit Parade in 1966: Roberto Carlos' 'Quero que vá tudo p'ro inferno', Wanderley Cardoso's 'Te esperarei' a cover of Ricky Gianco's 'Ti chercherò', The Beatles' 'I need you' (from 'Help!), George Martin's 'All quiet on the Mersey front' he wrote for Gerry & the Pacemakers' film 'Ferry cross the Mersey', which was misprinted as 'Wersey' on the album back-cover. The Pop's completed the album with a few nursery rhyme songs and some original J.Cesar material. 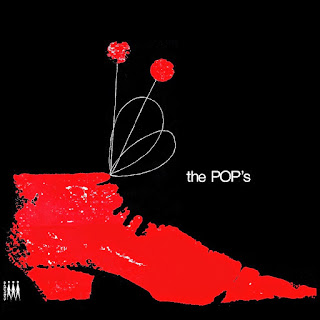 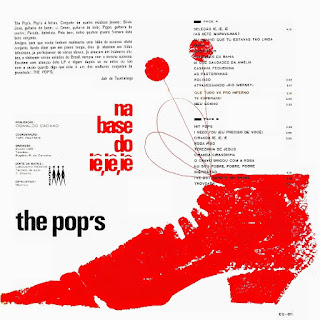 The title of the album 'Na base do iê iê iê' (On the iê-iê-iê style) referred to the way rock'n'roll was now known in Brazil: 'iê iê iê' or 'ié ié ié'. The word was coined out of the title of The Beatles song 'She loves you' yeah, yeah, yeah!

Brazilian translators working for film company United Artists in early 1965 didn't actually know how to translate 'A hard day's night', the title of The Beatles' first film. In Lisbon, the Portuguese translator came up with a weird title: 'Os 4 cabeleiras do após-calypso' a pun on the Bible's 'The four horsemen of the Apocalypse'. In Brazil they came up with this funny idea of calling it 'Os reis do ié ié ié' (The kings of yeah yeah yeah) and the name stuck... rock'n'roll became ié ié ié... 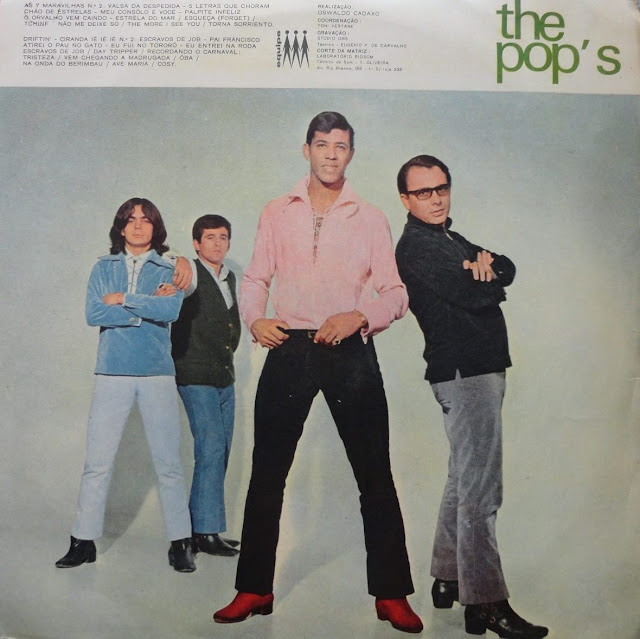 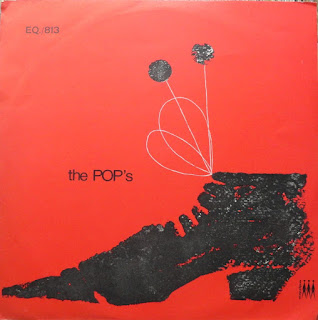 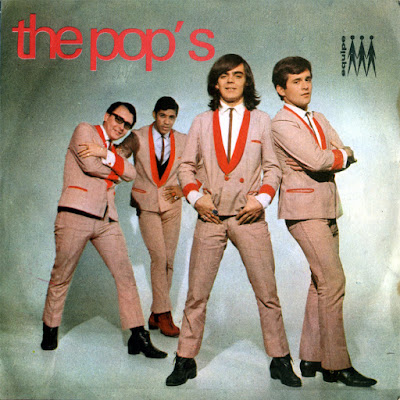 The Pop's extended-play for 1966 Christmas: Silvinho, J.Cesar, Parada & Pipo.
Posted by Carlus Maximus at 03:28 No comments: 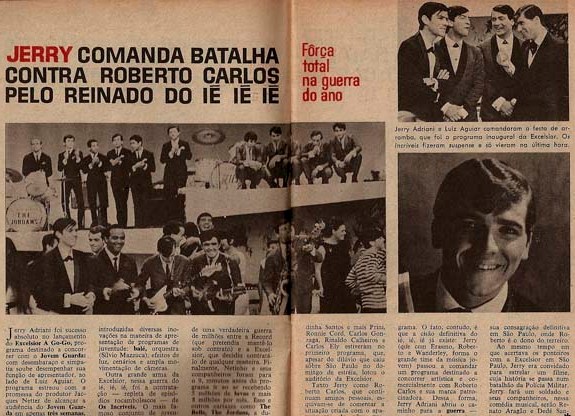 TV rock show 'Jovem Guarda' started on 22 August 1965 beamed by Sao Paulo's Channel 7, TV Record. It was an instant hit with teenagers who stayed home on late Sunday afternoons to watch Roberto Carlos introduce a string of singers and groups who played live on the stage of Teatro Record on Rua da Consolação.

On Sunday, 27 March 1966, Sao Paulo's Channel 9, TV Excelsior came up with 'Excelsior a go go' its own teen-age rock show to try and beat Roberto Carlos in his own game. Radio Bandeirantes DJ Luiz Aguiar would introduce the acts but singer Jerry Adriani was the real 'boss'. TV Excelsior poached a few acts from 'Jovem Guarda' as Prini Lorez, Os Vips plus bands Os Incriveis, The Jordans, The Bells and added a few older (Carlos Gonzaga) or lesser stars (Cidinha Santos and Carlos Ely) to its cast.

'Excelsior a go go' beamed at 7:00 PM on Sundays trying to get the same viewing public that had watched 'Jovem Guarda' from 4:30 to around 6:00 o'clock. Producer Jacques Netter had previous experiences having put on rock shows like Antonio Aguillar's 'Festival da juventude' (later called 'Reino da juventude' when Aguillar was poached by TV Record in early 1964) and other popular musical programmes. Production was lavish with the addition of a whole orchestra commanded by band-leader Sylvio Mazzucca and myriads of dancers that felt like one was watching USA's 'Shindig!' on ABC TV.

Everything was
the best possible but there was an structural fault: Jerry Adriani (real name: Jair Alves de Souza born in Belem-Sao Paulo on 29 January 1947) was not popular enough in the city he was born. So even though the show was really good and had an initial following it ended up being scrapped before 1966 was over. 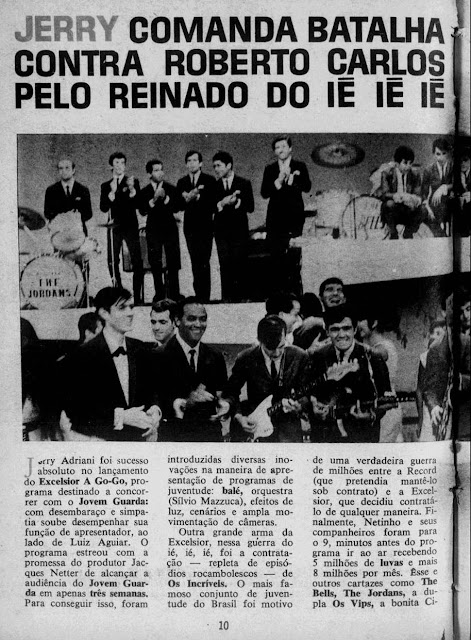 It was plain to see 'Excelsior a go go' emulated USA's 'Shindig!' (beamed on ABC from 16 September 1964 to 8 January 1966); from left to right: MC Luiz Aguiar, Ronnie Cord (background), Carlos Gonzaga, bass-player Risonho and guitar-player Mingo plus Rinaldo Calheiros and Carlos Ely in the background; up on the background platforms are The Jordans (left) and The Bells (right). 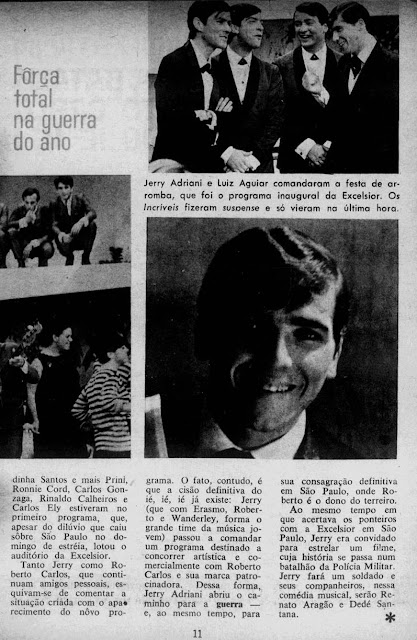 MC Luiz Aguiar, Os Vips (brothers Marcio & Ronald Antonucci) and Jerry Adriani have a little chat before the music goes on; Jerry Adriani was a nice-looking chap but no competition to Roberto Carlos. 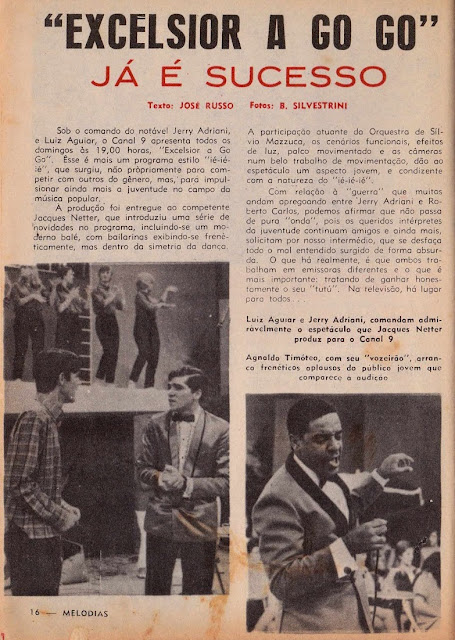 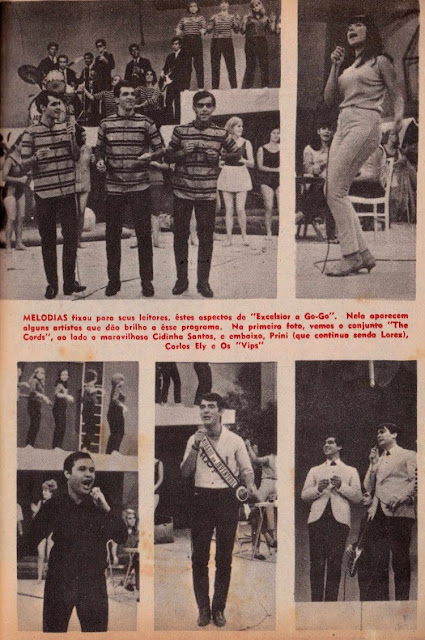 brothers Ronnie, Norman & Junior Cordovil as The Cords tried to make a wave as a vocal group but to no avail. Ronnie Cord had been the King of Rock some 3 years back but times were changing really quickly; Cidinha Santos had a mild hit with a cover of Rita Pavone's 'Scrivi! ('Escreve-me') in 1964 but was going nowhere 2 years later; Prini Lorez who dropped his last name to dissociate his image from that of Trini Lopez's who he had shamelessly copied was on the way down too; Carlos Ely was a good singer but not much of a hit either; brothers Os Vips were really good and successful. 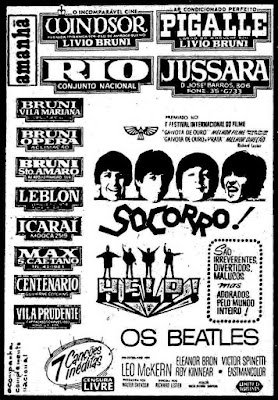 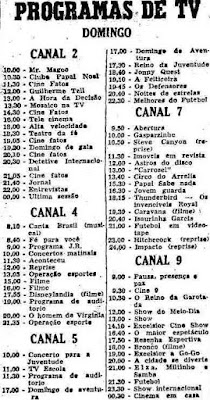 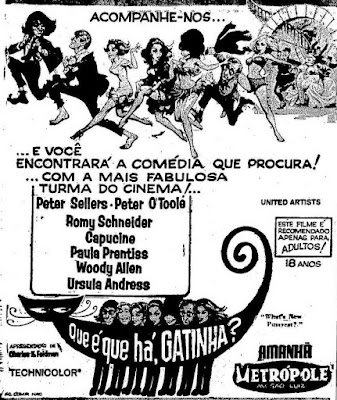 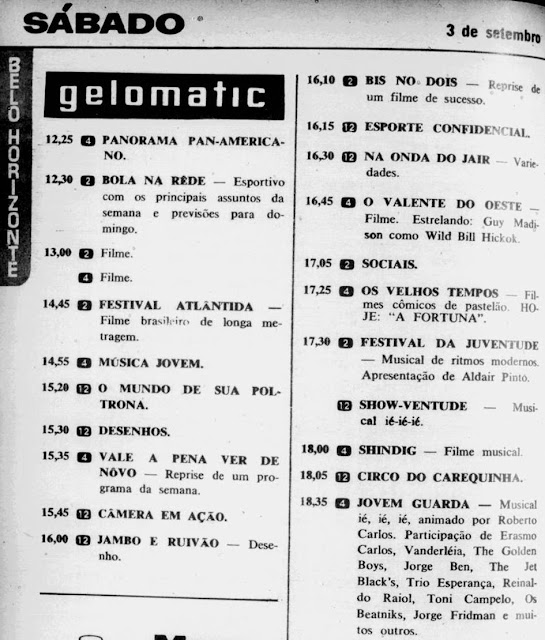 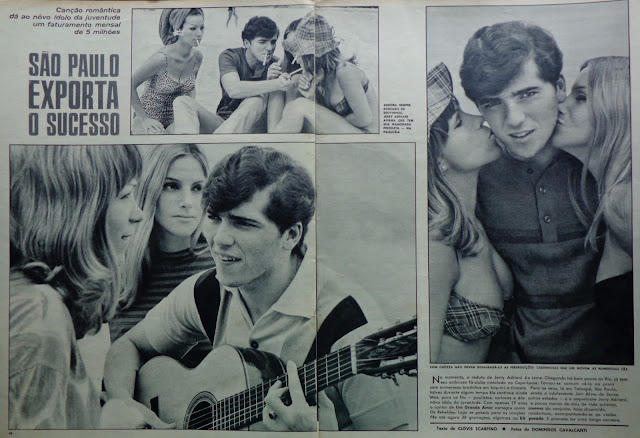 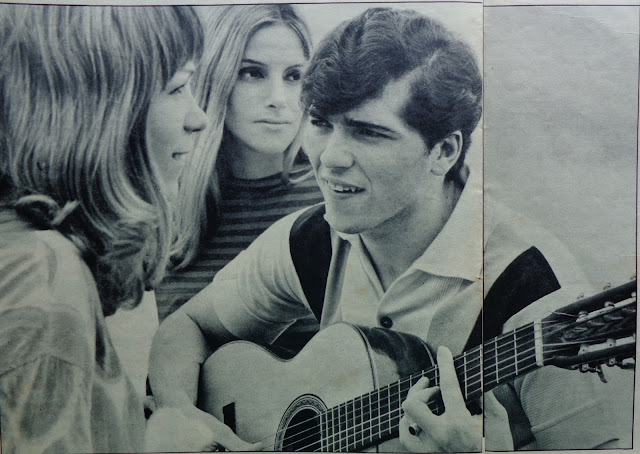