It is common knowledge that Rock'n'roll aka the Rock Era has started in the USA when the single (We're gonna) 'Rock around the clock' recorded by Bill Haley & His Comets reached Number One in the singles-charts on 14 May 1955.

And when Elvis Presley reached Number One on the pop charts on 10 March 1956, with 'Heartbreak Hotel', rock'n'roll music found a leader for millions of devoted teenagers worldwide. 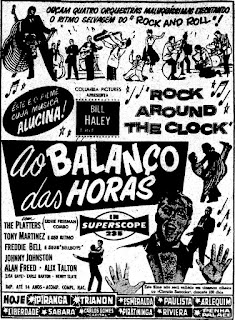 Brazilians who always took a hint from the 'Metropolis', read about the emergence of a new 'craze' called rock'n'roll in local newspaper & magazine but it took a while until Rock started showing up in Rio de Janeiro or Sao Paulo its two biggest cities. 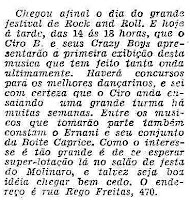 3rd February 1957 - OESP night-life columnist Mary Wynne announces the first rock'n'roll show in Brazil that would happen on the same week as the film 'Rock around the clock' premiered in São Paulo. A certain Ciro B. e seus Crazy Boys would show their prowess in dancing the new rhythm at Salão de Festa do Molinaro, on Rua Rego Freitas, 470. Ciro B. & the Crazy Boys would be accompanied by Ernani and his Combo, that usually played at Boite Caprice on the same Rua Rego Freitas, 547. 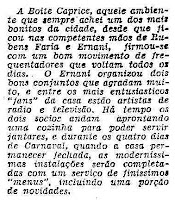 7 February 1957 - Mary Wynne gives more information about Boite Caprice and their owner Rubens Faria and Ernani, the latter was instrumental in putting on the first rock'n'roll event in the city.

I would say the rock'n'roll started showing its first signs in Brazil around 1957. Here are some newspaper clips about rock or movies related to the 'ritmo alucinante'. 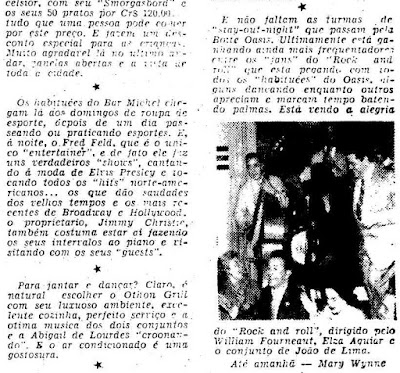 At Bar Michel, US pianist Fred Feld is a great sensation when he sings 'like Elvis Presley'. 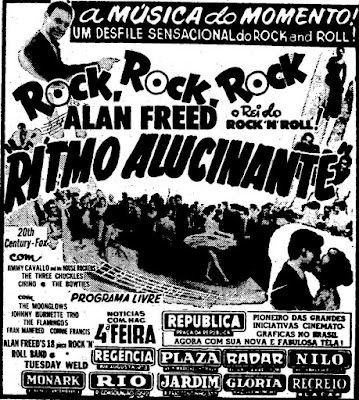 24 February 1957 - Rock's first film ever. It was released in the USA on 7 December 1956, barely 2 months before arriving in Sao Paulo which was like being released simultaneously... that showed how much the rock'n'roll craze was being eagerly folllowed by the South American youth. 'Rock, rock, rock' (Ritmo alucinante) starred Tuesday Weld & Teddy Randazzo and featured Chuck Berry ('You can't catch me'), Frankie Lymon & the Teenagers ('I'm not a juvenile delinquent'), The Flamingos, Connie Francis etc. 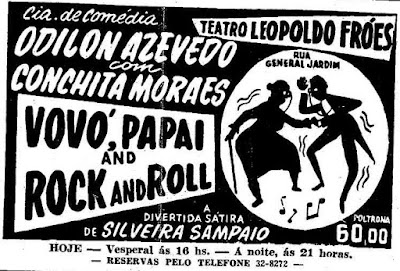 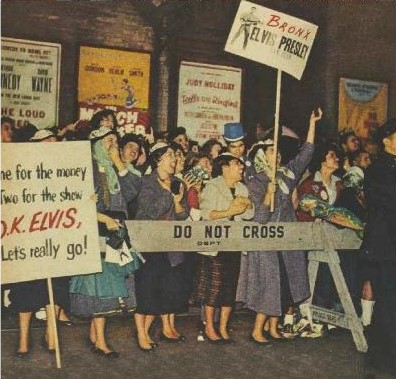 Kids go crazy about Elvis at the premiere of 'Love me tender' at the Paramount Theater in Manhattan on 15 November 1956. 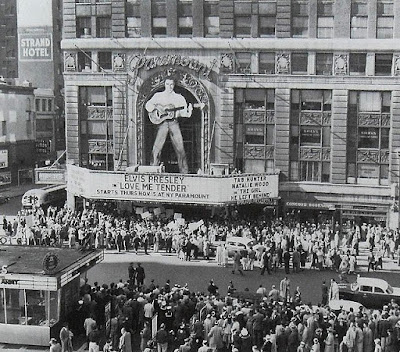 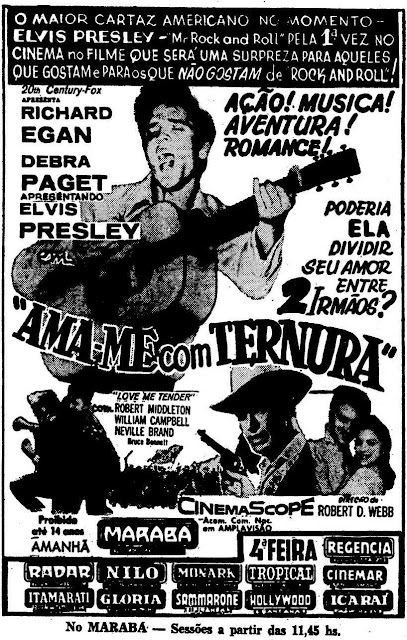 7 April 1957 - Rock'n'roll sensation Elvis Presley has his 1st movie 'Love me tender' (Ama-me com ternura) released in Brazil less than 6 months after its premiere at the Paramount Theater in New York on 15 November 1956. 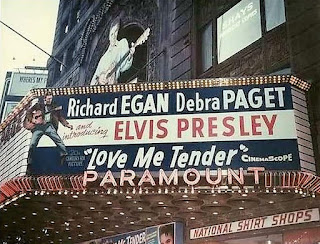 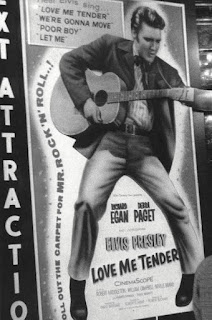 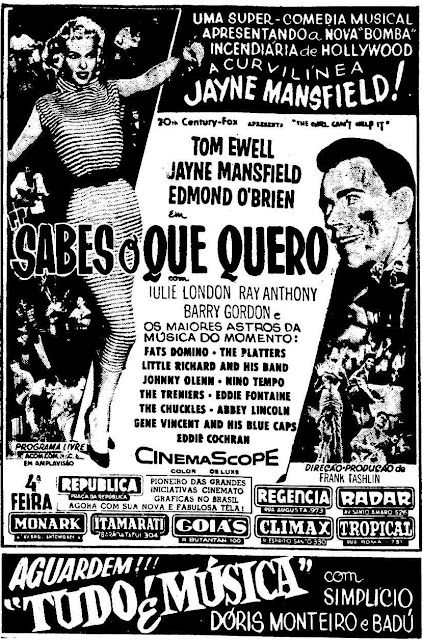 12 May 1957 - Barely 6 months after its release in the USA 'The girl can't help it' reached Brazilian shores as 'Sabes o que quero' (You know what I want). The movie was originally intended as a vehicle for American sex symbol Jayne Mansfield, with a satirical subplot involving teenagers and rock'n'roll music. The unintended result has been called the 'most potent' celebration of rock music ever captured on film. Gene Vincent sings his fundamental 'Be-bop-a-lula'; Julie London performs her red-hot 'Cry me a river'; Eddie Cochrane does '20-flight rock' (Albert Pavão covered it as 'Vigésimo andar') but Little Richard is the greatest of all the rock acts. 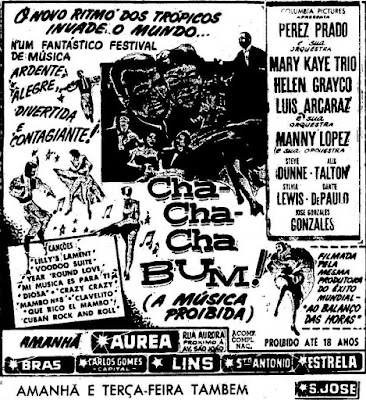 25 August 1957 - Even though 'Cha cha boom!' (A música proibida) (1956) is not exactly a rock-movie it was made in response to the whole craze about 'new' rhythms like the cha-cha, mambo. Done by the same company that did 'Rock around the clock' it stars Latin American band-leader Damaso Perez Prado... 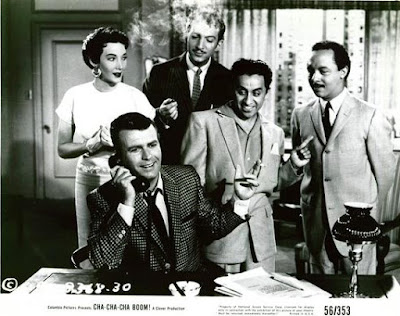 Latin American rhythm in the American Way... Mambo King Perez Prado is the one on the right... 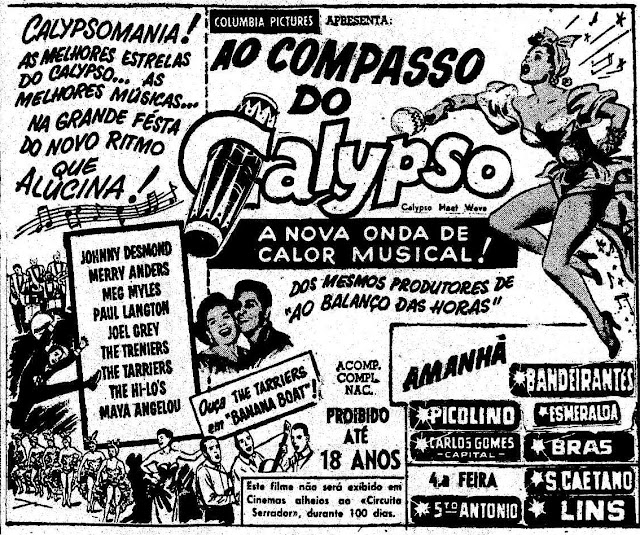 20 October 1957 - Before 1957 was through, another dance-craze movie is released: 'Calypso heat wave' (Ao compasso do calypso) produced by the same crowd who did 'Rock around the clock' and 'Cha-cha boom!'. See the well-behaved Hi-Lo's and The Tarriers trying their emulate Harry Belafonte in 'Banana boat song'. 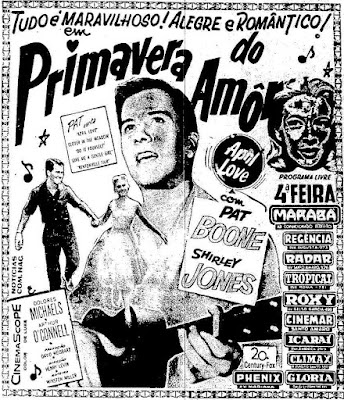 1st June 1958 - a milder version of rock'n'roll was personified by Pat Boone! He had a good voice, a goody-too-shoes appearance and could swing & rock just a little. Even though he covered Black rhythm'n'blues for Dot Records his most successful singles were ballads like 'April love' - that became the movie 'Primavera do amor' - or his cover of Gene Austin's 1931 hit 'Love letters in the sand'.

Posted by Carlus Maximus at 04:15 No comments: