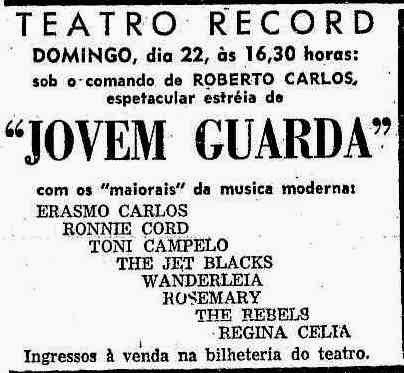 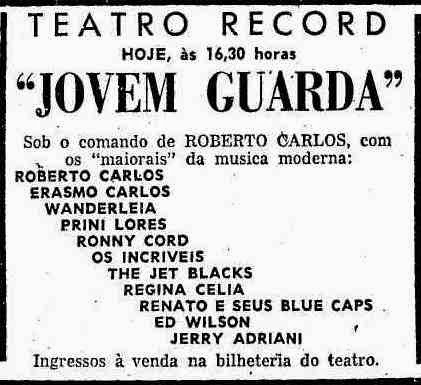 29 August 1965 - On the 2nd Sunday 'Jovem Guarda' seems like it's getting its groove. Roberto Carlos's name is followed by his mate Erasmo Carlos and Wanderlea completes what would soon become a 'troika' - they were either teenage friends (Roberto & Erasmo) or they recorded for the same record company (Roberto & Wanderlea). They were also inhabitants of Rio de Janeiro where they made most of their singing career up to that moment. Roberto was originally from Cachoeiro do Itapemirim-ES and Wanderlea hailed from Governador Valadares-MG.

One can also notice that CBS Records (Roberto Carlos's record company) must have had some say in the show's line up as Renato & seus Blue Caps, Ed Wilson and Jerry Adriani were added to the programme. Former instrumental rock band The Clevers changed their name to Os Incriveis and were in. So was Prini Lorez who started out imitating Trini Lopez and now was trying very hard to find his own way in show business. 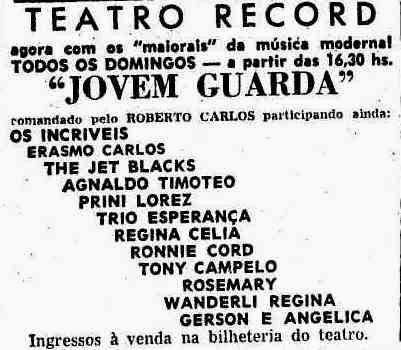 5 September 1965 - on the 3rd Sunday programme Roberto Carlos introduced a new act called Agnaldo Timoteo who belted out The Animals's 'The house of the rising sun' in English and made a good impression on the audience. Soon, Timoteo would be recording album after album of European hits covers for Odeon that sold like hot cakes. Wanderly Regina and duo Gerson & Angelica were not very well known by the public but had their chance on TV. 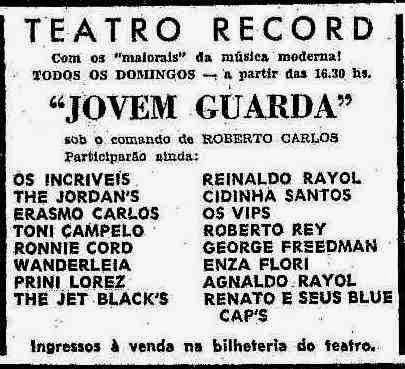 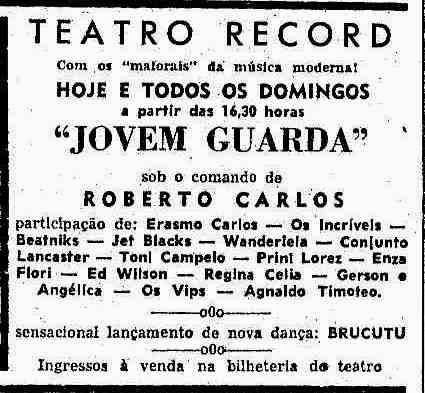 19 September 1965 - on the 5th Sunday Roberto Carlos introduced Conjunto Lancaster a dancing group who presented a new dance based on Roberto Carlos's 'Brucutu' a cover of The Hollywood Argyles's 'Alley Oop' (#1 at Billboard on 11 July 1960). Agnaldo Timoteo was back for an encore and The Beatniks appeared for the 1st. time. 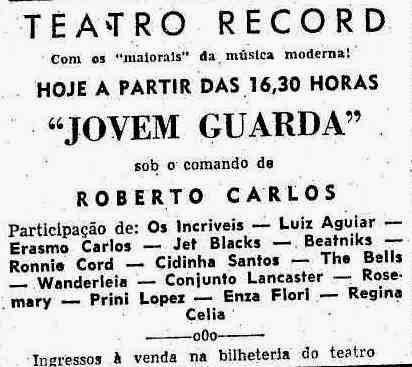 26 September 1965 - the 6th programme introduced Radio Bandeirantes's DJ Luiz Aguiar who had recorded a cover of Jimmy Fontana's 'Il mondo' (O mundo) for Chantecler plus The Bells who recorded for Fermata. 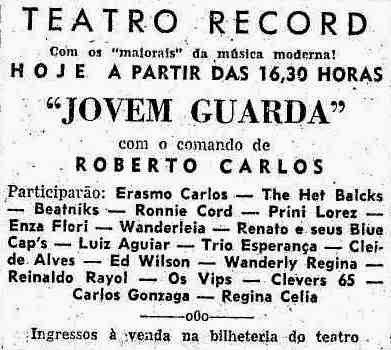 3 October 1965 - 7th programme brought former child-star Cleide Alves from Rio, Carlos Gonzaga, who'd been an early King of Rock charting consistently for 5 straight years (1958 through 1962) and The Clevers 1965 a brand-new combo who covered Beatles songs ('Sem resposta' or 'No reply'). 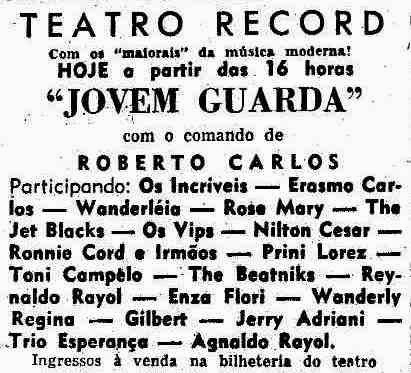 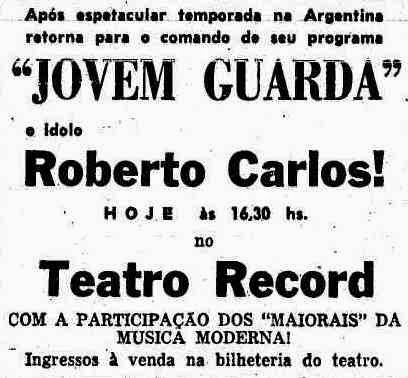 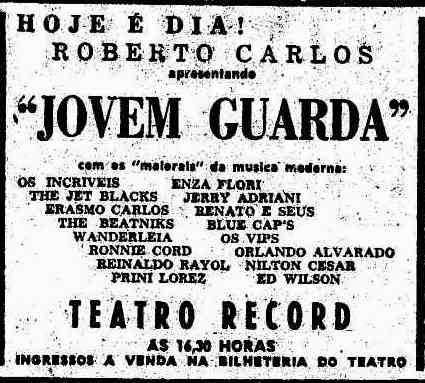 31 October 1965 - business as usual for the 11th Jovem Guarda. Note Orlando Alvarado, an Argentine dancer of Spanish folklore who recorded 'Bienvenido amor' (a Palito Ortega hit) accompanied by The Clevers that went up the charts instantly. 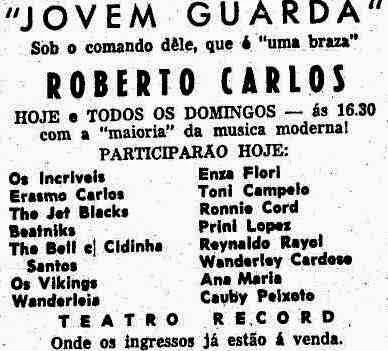 12 December 1965 - This is the last time TV Record sent a 'Jovem Guarda' ad to Estadao (OESP). See that Cauby Peixoto is Roberto Carlos's special guest star. Cauby was not exactly a rock singer but he had sung a rock tune in 1959's flick 'Minha sogra é da policia' in which rock-agitator Carlos Imperial took part along with his proteges Roberto Carlos & Erasmo Carlos who were now stars in their own right. Vocal duo Os Vikings and Ana Maria (?) also take part in the afternoon rock show.

'Festa de arromba' is a meta-linguistic song about a rock dancing party in which Erasmo Carlos goes and meets all the acts who usually performed at the TV rock show 'Jovem Guarda'. Erasmo mentions 16 acts in the body of the song plus 12 more acts in the spoken bit at the fading-end of the recording.

Combos had a special place in the bridge of the song: Renato & Seus Blue Caps, The Clevers (later they changed their name to Os Incriveis), The Jet Blacks and The Bells played at various places at the party.

In the last part of the song, Erasmo has a special place for Roberto Carlos, followed by Tony Campello & Sergio Murilo, both having been earlier 'kings of rock' plus Demetrius, Ed Wilson and José Ricardo, who was not actually a 'rock' singer but mainly a ballad singer.

At the spoken bit, Erasmo mentions The Jordans, an instrumental band, The Golden Boys, a vocal quartet and their siblings Trio Esperança. Rossini Pinto, a singer-songwriter involved in Rio's rock scene plus Wilson Simonal, Jorge Ben and Jair Rodrigues three Black acts identified with samba instead of rock music. 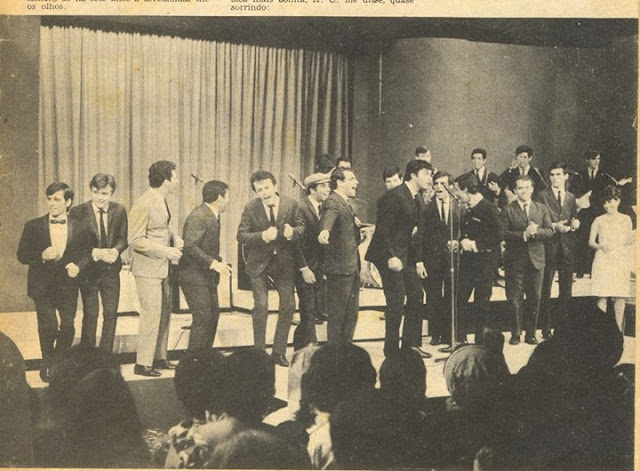 'Jovem Guarda' at TV Rio, Channel 13 in Rio de Janeiro some time in September or October 1965. When anchor/compere Roberto Carlos sang his last number he usually invited all the guests that took part earlier in the programme to join him on a song. From left to right: Argentine singer Roberto Livi, Nenê (bass-player with The Beatniks), Sylvio Cesar, Prini Lorez, Gato (virtuoso guitar-player with The Jet Blacks), Bogô, Nino (drummer with The Beatniks - only the top of his head looking back at Netinho at the drums), Ronnie Cord, Tony Campello (in the background), Erasmo Carlos, Junéco aka Hervé Cordovil Junior, Roberto Carlos (wearing a Beatle suit), Zé Paulo and Sergio Canhoto (both members of The Jet Blacks) and a not-identified female singer.

Os Incriveis is the band playing in the back, from left to right: Netinho (sitting at his drums you can hardly see the top of his head), Manito, Neno, Mingo & Risonho. Photo published by an unidentified Rio de Janeiro magazine. 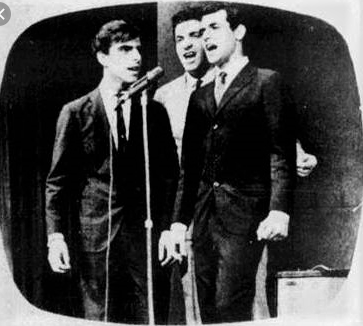 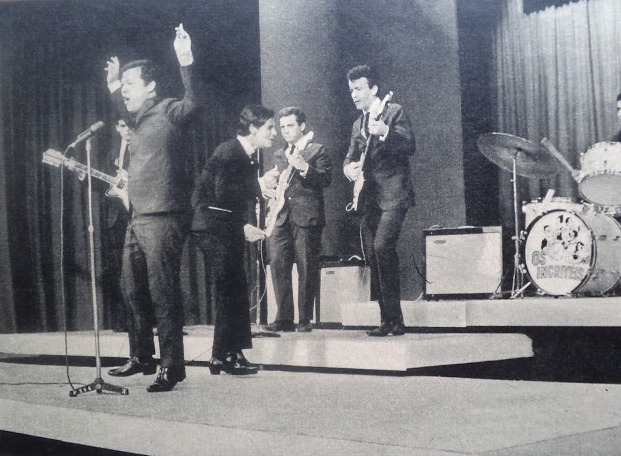 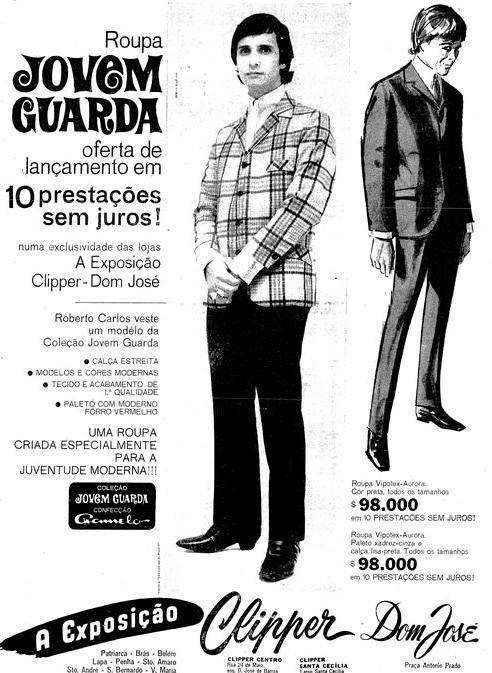 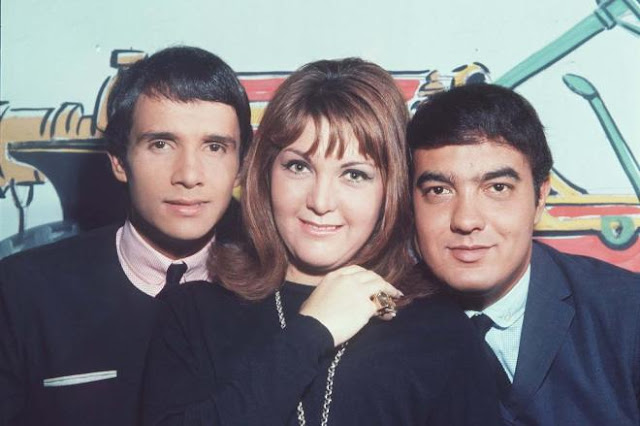 Posted by Carlus Maximus at 14:10 No comments: