8 January 1956 - Richard Brook's 'Blackboard jungle' (Sementes de violência) with Glenn Ford had 'Rock around the clock' with Bill Haley and His Comets in the sound-track and is considered the very first movie in which rock'n'roll is mentioned. 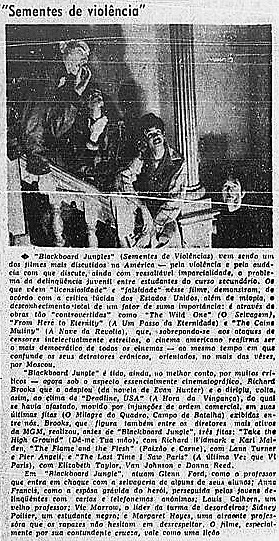 It is a temerity to say that Hollywood was the 'most democratic cinema in the world' when everyone knew most of the European cinema was decades ahead of the Yankees. Besides, the USA were barely out of the McCarthism witch-hunt, one of the most anti-democratic crusades ever perpetrated in the world. 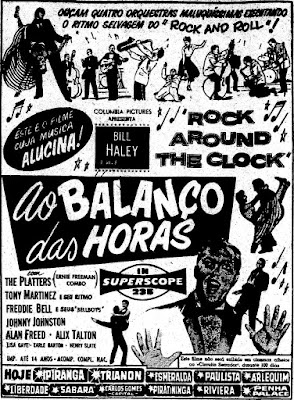 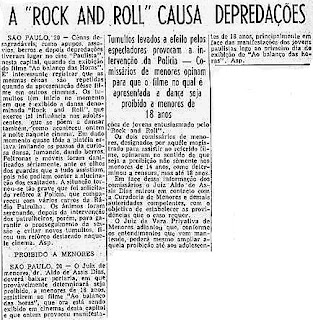 21st December 1956 - Rio's 'Correio da Manhã' reports about Cine Paulista's being vandalized by middle class youth during the projection of 'Rock around the clock'. Note that the word 'rock'n'roll' is treated as a feminine noun: 'a rock'n'roll'... eventually it would become a masculine noun. 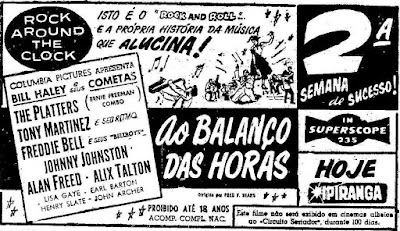 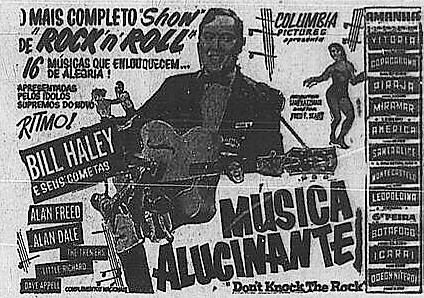 10 March 1957 - Right on 'Rock around the clock's heels came 'Don't knock the rock', another exploitative film to cash in on the rock wave. 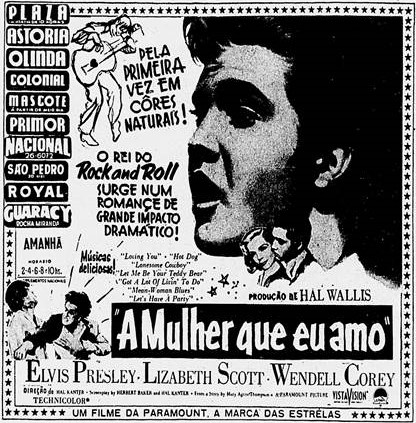 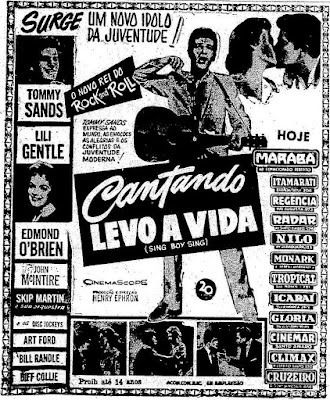 16 July 1958 - Tommy Sands became an overnight sensation and instant teen-idol when he appeared on Kraft Television Theater in January 1957 as 'The singin' idol' where he played the part of a singer was was very similar to Elvis Presley, with guitar, pompadour hair, and excitable teenage fans. The song from the show, 'Teen-age crush' reached #2 on 23rd February 1957, at the Billboard charts for 2 weeks.

'Sing, boy, sing' was shot in record time by Fox and released in the USA in February 1958, to positive reviews, but it turned out to be a financial failure. 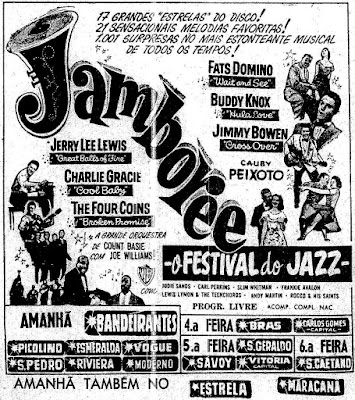 12 October 1958 - a 1957 Hollywood production 'Jamboree' called here mistakenly as 'O festival do jazz' was one of the first rock'n'roll exploit-movies. Brazilian singer Cauby Peixoto who was living in the USA in 1957, appears in the credits as Ron Cobby, plays a rock D.J. and sings something about a toreador... 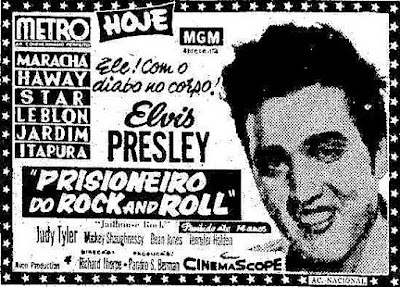 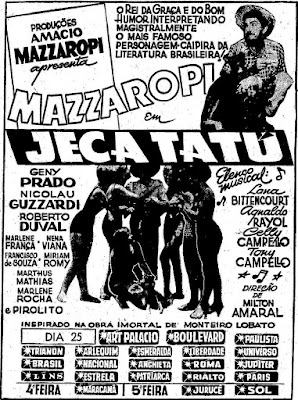 25 January 1960 - Mazzaropi's rural hero 'Jeca Tatú' may be the farthest thing possible from rock'n'roll but it was the flick that introduced Brazilian rock sensations Tony & Celly Campello to a larger audience. 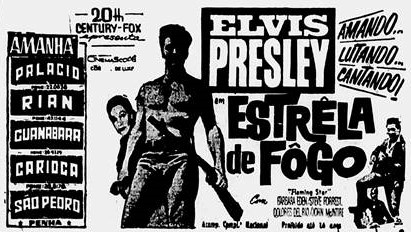 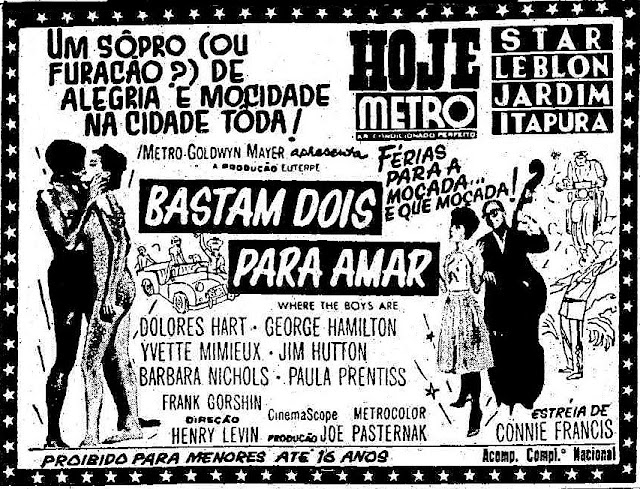 7 September 1961 - One could hardly call 'Where the boys are' - quaintly translated into Portuguese as 'It takes two to fall in love' (Bastam dois para amar) - as a 'rock movie' except for the presence of Connie Francis as an actress and singer and Neil Sedaka's having written the opening title. George Hamilton and Yvette Mimieux were the first stars to confirm their presence. Paula Prentiss was cast despite never having made a movie before. Connie Francis also made her movie debut. 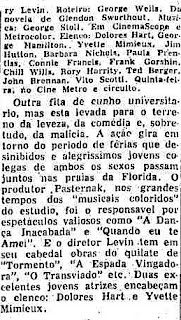 'Where the boys are' is less rock than cool modern jazz - or West Coast jazz - popularized by such acts as Dave Brubeck, Gerry Mulligan and Chico Hamilton, then in the vanguard of the college music market, features in a number of scenes.

MGM bolstered the film's success potential by giving a large role to Connie Francis who solicited the services of Neil Sedaka & Howard Greenfield, to write original material for her. Sedaka & Greenfield wrote 2 potential title songs for the film, but producer Joe Pasternak passed over them in favour of a lush 1950s style movie-theme. Francis recorded 'Where the boys are' on 18 October 1960, in a NYC session with Stan Applebaum arranging and conducting. 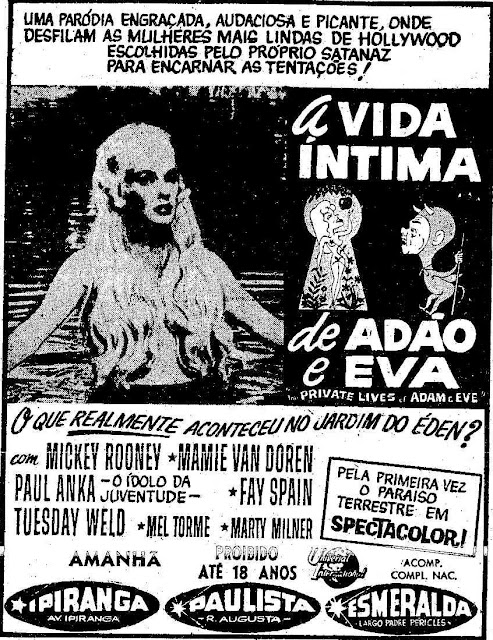 22nd October 1961 - This ain't exactly a 'rock' movie but for the appearance of heart-throb Paul Anka opening the credits singing and playig his 1959 hit 'Adam and Eve'. Mamie Van Doren always had a foot in the music business being the wife of horn-player Ray Anthony besides having appeared in seminal 'rock movies' like MGM's 'High School confidential' (1958) and 'Girls town' in 1959 where she appeared in the nude. Tuesday Weld always played a 'rebel kid'... and Marty Milner would be at Route 66. 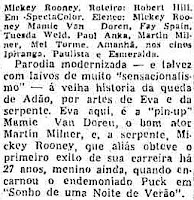 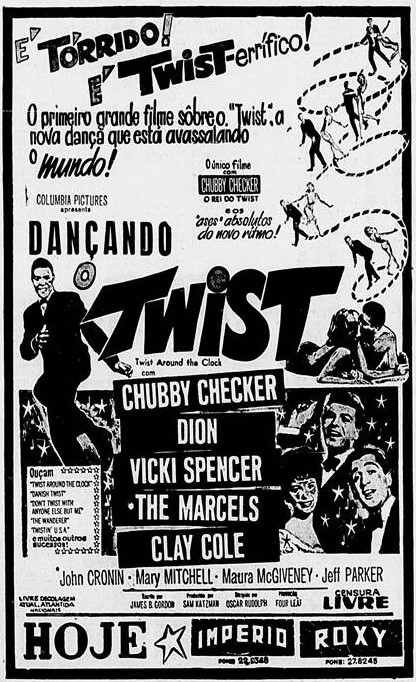 4 January 1962 - 'Dançando o twist' - 'Rock around the twist' - was a new dance-craze which was actually an off-shoot of rock'n'roll & rhythm'n'blues. 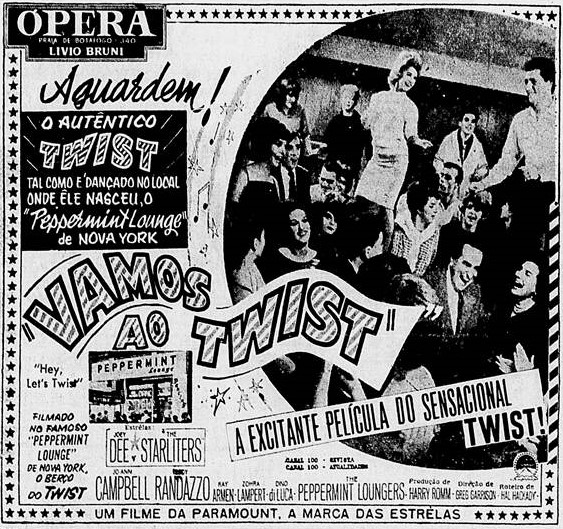 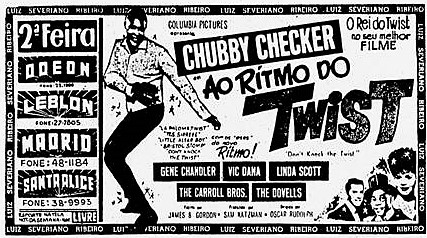 29 September 1962 - At the height of the twist craze in Brazil 'Don't knock the twist' (Ao ritmo do twist) with Chubby Checker starts playing in Rio de Janeiro.
Posted by Carlus Maximus at 09:46 No comments: